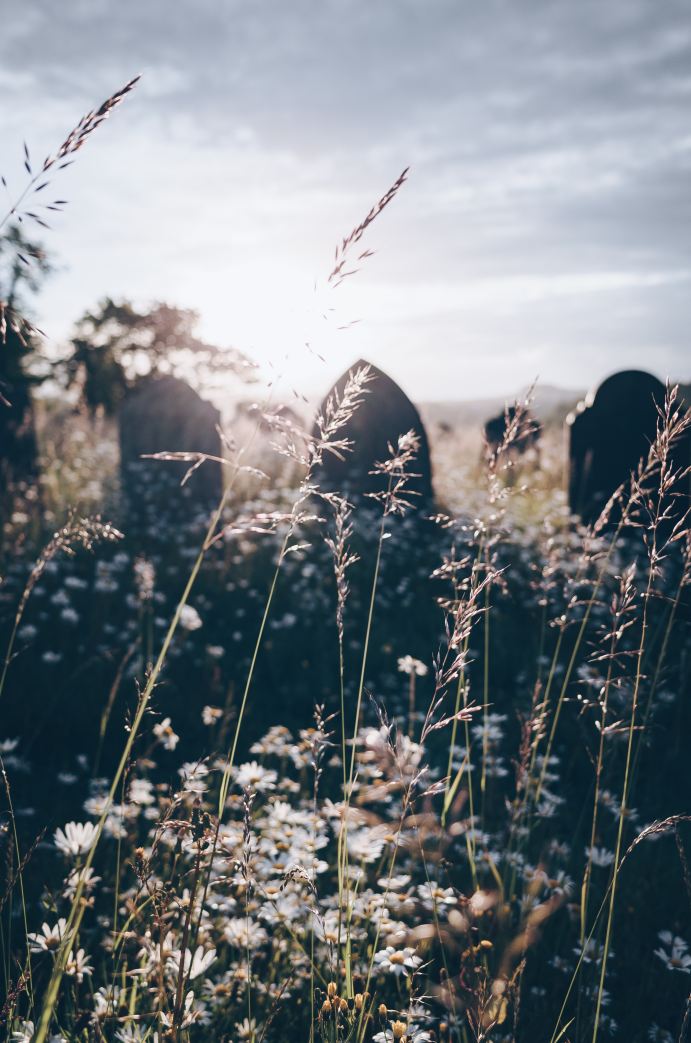 Since Valentine’s Day is this Friday, I thought I might share some romantic content. During my research in the newspaper archives, I found two stories about mourners falling in love with cemetery employees.

Mrs. Thoresca Cartisser (age 72) married Louis Schafer (age 74) in a simple ceremony on July 18, 1945. The bride wore lavender with matching posies in her straw hat. The two met at St. George’s Cemetery in Pittsburgh. Cartisser was visiting her second husband’s grave (“dressed in mourning black”) and Schafer was the cemetery caretaker. The romance began with walks and then led into phone calls from Schafer to Cartissser’s residence. Along with their age, the article explains, they both had the German language in common (she was from Austria and he was from Germany). In addition, they were both married twice before.

Charles Kramer, the oldest gravedigger of the Evergreen Cemetery in New York, “has probably dug more graves than any other man living in this city.” He fell in love and “wooed” Mrs. Theresa Furman, having spotted her during her daily visits to her late husband’s grave.

Every time Mrs. Furman appeared at her husband’s grave, Kramer, somehow or other, always succeeded in being ahead of her. He carried water for her. helped her plant flowers and did other little things, all of which aided him later when the time to propose to the Widow Furman arrived.

A few weeks later they were married and the gravedigger moved in with Mrs. Furman and her stepson James Weigand and son William Furman. One night, Kramer got into a quarrel with the sons over a “trifling matter.” The next night he received a blow when entering the home: “biff! something struck me over the head. It appeared to me as is some one was intent upon slipping me into one of the holes I had dug that day.”

The gravedigger left the matter alone, only to be hit again:

Last night I was going into the house when something fell on my head again. I heard some one say, ‘We hit him square that time,’ and disappear. I thought at first the house had fallen on me. but later discovered that it was nothing more than a good sized baseball bat.

Well, as you’ve probably figured out, it was the two sons. They were held on $100 bail. Kramer just went back to doing what he does best: “Evergreen’s champion grave digger then hurried to his place of employment, announcing that he had a ‘little job of digging a few graves’ waiting for him.”

I am not sure of the effect this incident had on the marriage of the mourner and gravedigger as the article just ends with no mention of Mrs. Theresa Furman.

Sorry to end on a depressing note. If you can handle it, check out my past Valentine’s Day post on ghost stories of tragic love.

Photo by Jill Dimond on Unsplash

1 thought on “Mourners Find Love in a Cemetery”