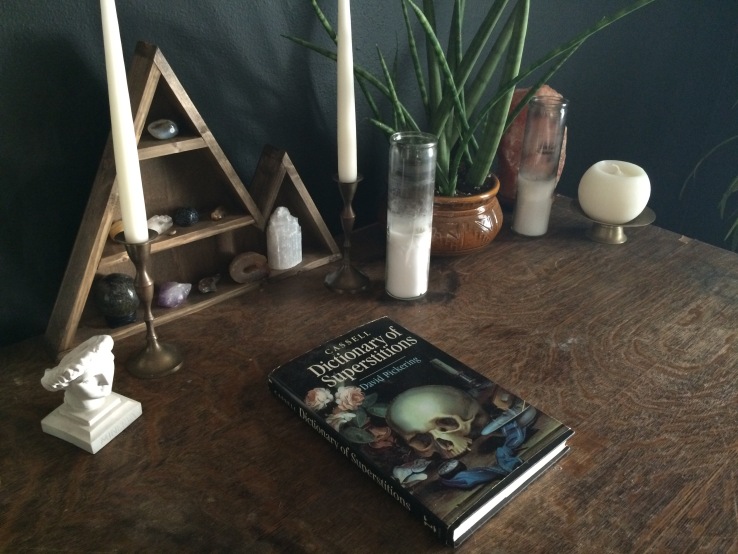 Each week, I walk many blocks to the used bookstore to explore its supernatural and horror section. It’s one of those book stores where shelves are filled and the floor is covered with stacks of books. You can usually find me sitting on the floor, turning the pages of some new find.

Now that I have my own room for my reading and writing, I have the space to build a substantial supernatural library. And, nothing could make me happier. I have always taken notes when reading, because I don’t want to forget what I’ve read. I also like something to reference when I return to a topic. This is why I’ve always kept a commonplace book. In fact, the first post of this blog was book notes from Herbert Thurston’s Ghost and Poltergeists.

Today’s notes are from a recent find, David Pickering’s Dictionary of Superstitions. This book contains superstitions about food, body parts, weather…really, a variety of subject areas. Below are notes I took the interesting supernatural entries. Enjoy!

Fariy (p. 100): “Great care should be taken to avoid dark green ‘fairy rings’ in the grass, which mark the place where the fairies have held a circular dance at midnight (the rings are actually made by a fungus). It is said that these may even indicate the whereabouts of a fairy village. It is throught very dangerous to sleep in one of these rings or even to stop into one after nightfall – especially on the even of May Day or Halloween – and livestock are also reputed to keep their distance from these phenomena.”

Ghost (p. 116): “Measures that may be taken against encountering ghosts include, according to Scottish tradition, wearing a cross of rowan wood fastened with red thread and concealed in the lining of one’s coat.”

Gremlin (p. 122): “The only way to foil the activities of gremlins, apparently, is to lay an empty bottle nearby – the mischievous creatures will crawl inside and stay there.”