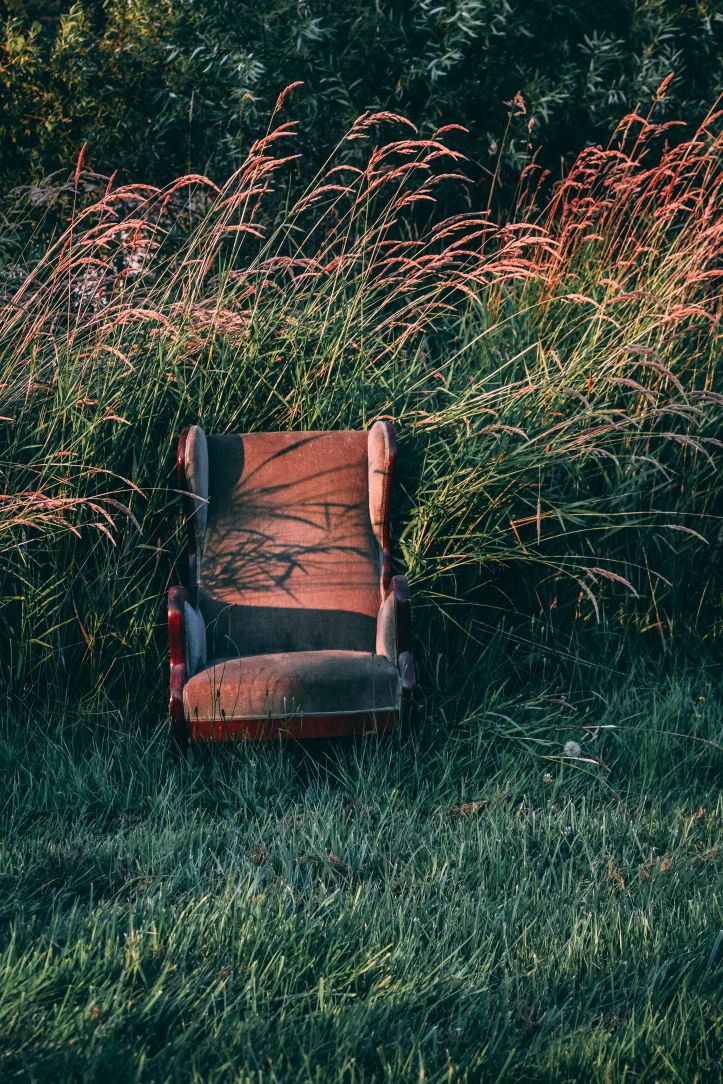 You know when you use a chair after someone and it’s still warm? It’s like that.

OK. I’m guessing, but haunted chairs are a thing. Whether the chair is possessed by something or just a tool for the ghost, sitters should beware. The following are haunted chairs I came across during my research, from established folklore to personal stories.

Grab a seat (no, not that chair) and enjoy!

Thomas killed his father-in-law, as legend has it, over a chair.

He beat his father-in-law to death with a hammer after he sat in his favorite chair, and hid his body in the woods. Thomas was found and sentenced to death. He was hanged, tarred, and put in the gallows. He would scream from the gallows: “May sudden death come to anyone who dare sit in my chair.”

The chair was put in the Thirsk Museum in North Yorkshire, England. People who have sat in the cursed chair suffered from brain tumors, car crashes, etc. The museum eventually hung the chair from the ceiling so no one could sit in it again.

A family in Oakland, California bought their father/husband the most expensive lounging chair when he retired from being a high school shop teacher. The leather chair had a lever-operated footrest, built in heaters and massagers, and an armrest that doubled as storage and cup holder. The rule of the house was only Dad could sit in the chair, but the family cat was allowed to keep the seat warm when not in use.

After Dad passed, the family continued to honor the rule…except once.  One of the adult children took a seat, tilting the chair back, and raising the footrest. The chair suddenly returned to the upright position, almost ejecting the occupant. No one ever took a seat again (except for the cat). The family also reported the massagers starting on their own, even when it was unplugged. Late at night, the footrest would pop up. Dad’s favorite books would disappear from the bookshelves, only to be found in the armrest storage later.

Maybe heaven is a lounge chair.

This summer, television personality and paranormal investigator Zak Bagans closed his Devil’s Rocking Chair exhibit after guests and friends suffered extreme emotional reactions. The chair was used during the exorcism of David Glatzel by Lorraine Warren. During this exorcism, the demon allegedly left David and entered Arne Cheyenne Johnson’s body. Johnson later killed his landlord and attempted to plead not guilty due to possession at the trial. Johnson was convicted of first-degree manslaughter and ultimately served 5 years in prison.

According to Bagans, “Six people all shared the same disturbing, uncontrollable crying during the short time I opened the exhibit, one of them being a guest who also collapsed directly above the Devil’s Rocking Chair on the stairs [The chair was directly under the stairs].” Bagans himself experienced an intense response to the chair when it was in his home:

Me and a friend felt an evil presence move between us as we were sitting down in my living room, which then caused my dog to growl […] I then became very affected, began speaking strange things about God and Satan with my head down, and then my friend began to cry uncontrollably and literally ran outta my house.

Bagans purchased the chair hours before Lorraine Warren’s death for $67,000. The upcoming Conjuring 3 movie was inspired by the chair.

The Velvet Chair of Wittenberg University

William A. Kinnison, the 11th President of Wittenberg University, wrote a book about the university titled America’s Most Haunted Campus. In his book, he tells the story of a haunted red velvet chair(s). The chairs, “a fancy, carved and upholstered wooden Victorian-style gentleman’s chair of the gay nineties variety,” were used in the literary societies on the third floor of the recitation hall. They eventually scattered throughout campus. Apparently one of these chairs is haunted, but maybe the others are too?

According to legend, if you take time to stare at the haunted chair patiently, a “dustlike image” of a handsome man will appear. He then vanishes, giving off the sound of a faint sigh or muffled sob. He hasn’t appeared long enough for people to ask why he’s there.

There is much folklore attached to chairs and benches in cemeteries. Placed to give visitors a seat when visiting deceased friends and family, legend says they actually do not give such respite.

Various legends are attached to a funerary sculpture like the one pictured to the right, often called a “mourning chair.” Popular during the 19th Century, these eventually went out of fashion and their original meaning was replaced with paranormal folklore. Most often they are called “Devil’s Chairs” and it’s believed that sitting on the chair will incite a visit from the devil. There are many other superstitions attached to the act of sitting on such memorials or other benches and chairs in cemeteries. Here are a few examples.

The Chair in Pieces

I found this ghost story on a website YourGhostStories.com. A user explained that during a home renovation, they found a carved chair back behind a wall. Then, in a boarded-up storage space, they found the seat’s chair and two legs. When pulling weeds in the yard, the user found the other two legs with a bit of damage. The family put the chair together, instantly feeling uneasy by its presence. They took it apart, put the pieces in a trash bag, and left it in the garage for years.

They eventually moved and the chair came with them. The user felt a desire to assemble the chair, but warned everyone not to sit in it. One night, the user’s husband sat in the chair. He seemed to go into a trance and was hospitalized that night due to amnesia-type symptoms (the user does not say, but he seems to be OK now). The chair now sits unbothered in the guest room. Sometimes a mysterious mist appears in photographs of the chair.

Photo by Michael Nunes on Unsplash