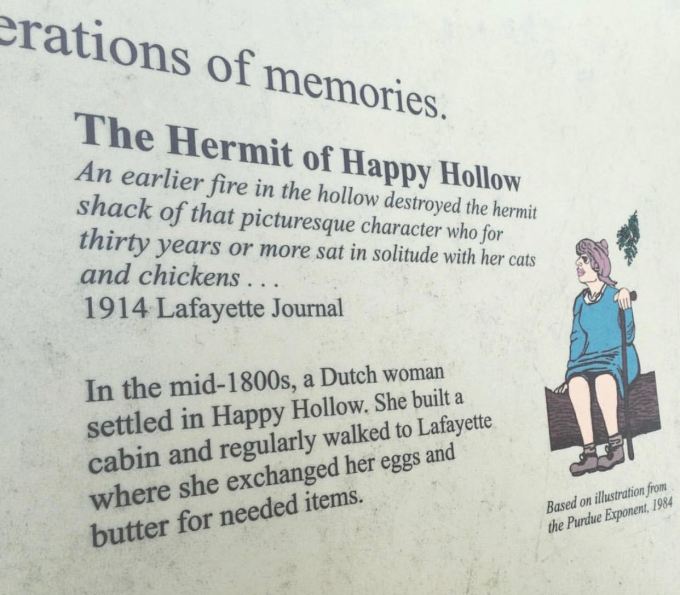 A walking path plaque in Happy Hollow Park touches briefly on the life of Jennie Jahonica, The Hermit of Happy Hollow. She was known for simply wanting solitude.

With the little slithers of free time I have in my life, I try to learn more about Jennie Jahonica. Unfortunately, my research has only led me to sensationalized newspaper articles. Therefore, please take the following information with a grain of salt. I will share edits and updates when they become available.

Jennie Jahonica was born in Huff, Holland. She started working in the fields around the age of ten and, for the next eleven years, “worked as hard as any man” (Indianapolis Journal) She married a man named Kineff (last name) and they had a child. He died when the baby was only a few months old. Around 1850, she came to America with her brother and settled on a farm near Chicago, IL. She met and married a man with the last name Jahonica. He unfortunately died shortly after they were married. She then moved to Lafayette with her daughter where they found work on a farm.

Then, as the Indianapolis Journal describes, “came the tragedy that blasted her life and caused her to withdraw from her friends and associates to seek peace of mind the lonely ravine.” Jennie’s daughter died in 1875. Heartbroken, she moved into a deserted structure (allegedly made of mud and straw) in Happy Hollow. She lived there for four years until a fire destroyed her home. She made due with what she had until the women of German Reformed Church (some sources say Holland Reformed Church) built her a new home. When her health began failing, she moved into the county asylum. She eventually ended up at the County Farm (also called the Infirmary in some sources). She died December 22, 1903.

Some other interesting tidbits I came across:

Where does my research go next? I would love to find out more about Jennie Jahonica’s life beyond the headlines. I would also like to find out where she is buried. Unless, as in life, she wanted to be buried away from and unbothered by the public.

Learn more about another Hoosier “hermit” in my post about Diana of the Dunes.