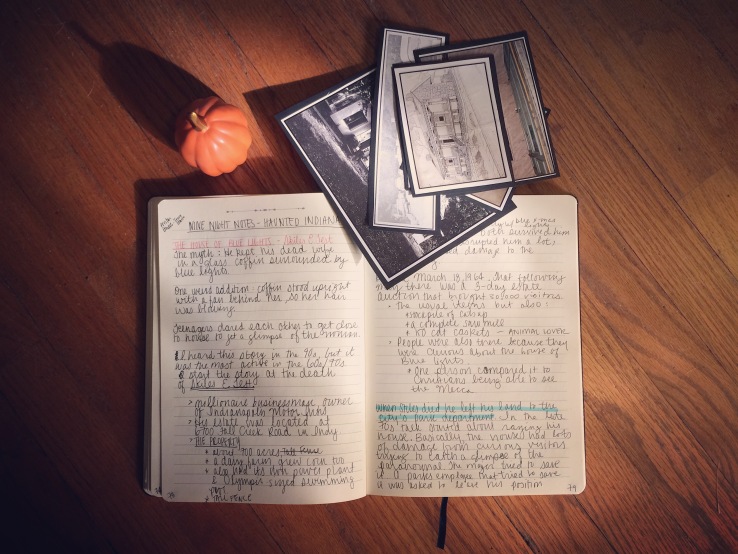 I was recently invited to a friend’s home on a Wine Wednesday to share some ghost stories . She thought a live version of my #humpdayhaunts series (on Instagram) would pair well with wine.

This was my first time being a “guest speaker” on a paranormal subject, so I was very anxious! I decided to narrow down my subject to Indiana ghost stories. I also used the opportunity to find new material. For a few nights, I put aside time to fill my commonplace book with Hoosier folklore.

The night of the event, I came equipped with homemade bookmarks, zines on Haunted Indiana bridges, my commonplace book, and pictures for my “presentation.” I thought if I bored them to death, I could at least send them home with some goods. 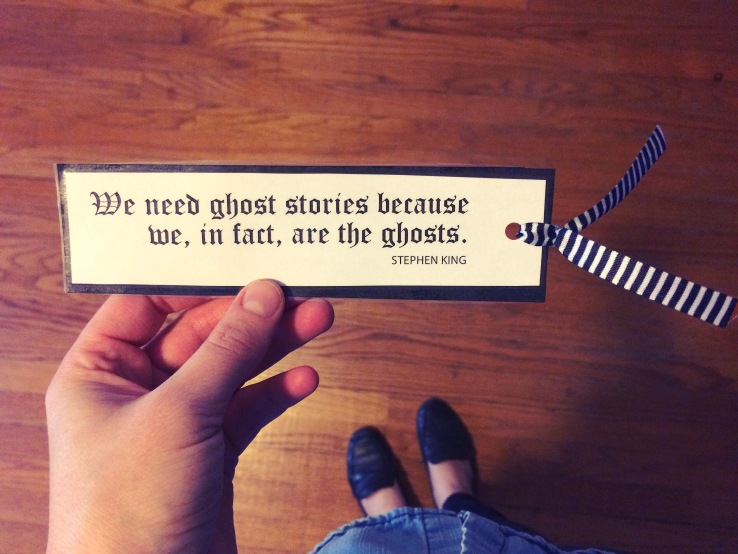 I shared about five ghost stories with two focused on mausoleums (because I love a haunted mausoleum). Funny enough, both haunted mausoleums are located in Highland Lawn Cemetery in Terre Haute, IN (which I’ve added to my cemetery bucket list).

So, there was a wealthy businessman named Martin Sheets who lived in Terre Haute in the 1900s. Martin had an intense fear of being buried alive. He had a reoccurring dream that he was unable to move or scream when the doctor pronounced him dead, and he then regained consciousness in a coffin deep in the dirt. Luckily, Martin had some money to insure this did not happen.

Martin first had a coffin custom made with latches on the inside, so he could easily open his coffin. To make sure he didn’t have the pressure of dirt on his coffin lid, he had a mausoleum built. Lastly, he had a phone installed in the mausoleum that could make calls to the cemetery’s main office. Imagine getting that call: “Hi, y’all. It’s Martin. Can you come get me? I seem to have been buried alive.”

In 1910, Marin died and was placed in his mausoleum. The phone connected to the cemetery office until they got a new phone system, but they did keep the phone connected and active (it was in his will and paid for after all).

Several years later, Martin’s wife passed. She was found dead in her home, clutching her telephone tightly. Family members assumed she was calling for help. They held a funeral and prepared her to join her deceased husband in the mausoleum.

When cemetery workers went to place her coffin in the mausoleum, nothing seemed unusual or out of place…except that the phone was off the hook and hanging from the wall…

Did Martin call his wife from beyond the grave?

In 1920, an elderly man named John Heinl passed away. The citizens of Terre Haute liked him very much, but his dog loved him the most. Wherever John went, so did the dog. Everyone in town called the bulldog “Stiffy Green,” because he had green eyes and walked with a stiff leg.

When John died, he was placed in a mausoleum and Stiffy Green was placed with a friend. The mournful dog would run away often and was always found on the steps of his deceased owner’s mausoleum. Eventually, everyone decided it would be best if Stiffy Green just became a cemetery dog.

Stiffy spent the end of his days in the cemetery. When he passed away, he was stuffed and placed next to the tomb of his owner.

Several months after Stiffy Green’s death, the cemetery caretaker heard a dog barking on the way to his car. He instantly recognized it as Stiffy Green’s bark coming from the direction of John’s mausoleum. Along with the phantom barks, people also reported seeing the figure of an elderly man strolling the cemetery with a small ghost bulldog following along.

Both stories are some fun Indiana folklore. Please note there are multiple versions of each story and some details have been proven false over time. But, I’m not here to ruin a perfectly good story.

2 thoughts on “In My Commonplace Book: Two Mausoleums and a Bottle of Wine”